You may have seen the movie Eternals or read the reviews. Our take on this movie is that there’s much more than meets the eye. No spoiler here, we’re just taking a brief look at the journey of 3 of the characters, how they react to disappointment, failure and simply being human.

The all-powerful, Ikaris, blessed with immense abilities and strength and Sersi’s long-time love interest (think centuries-long!)  He even fires energy blasts from his eyes! But as strong as he may be, Ikaris is faced with conflicting pains in this movie as he cannot see eye to eye with the purposes of the team including Sersi.

Choosing to stay loyal to the diabolical plans of the Celestial over love for mankind and even Sersi, he lost his teammates’ trust. Rather than find a way to resolve the conflict within himself, Ikaris became angry and disappointed. As he could not live with the situation nor himself, he left his team for good and flew into the sun.

Our friends and our loved ones may not always choose to see things our way. Sometimes we have to learn to agree to disagree in our views and still try to find ways to live harmoniously despite our differences.

Sersi – When things fall apart, save what you can 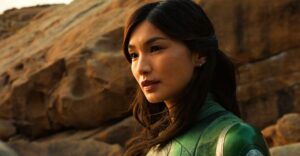 Played by the strong Gemma Chan, Sersi is one of the most powerful Eternals. With the ability to manipulate cells and matter, Sersi is apparently more powerful than even Dr Strange in magic. As seen in the movie, she turned a moving bus into a cloud of red petals to save fellow Eternal, Sprite.

Despite her fantastic ability to transform and create, she could not use her powers on relationships, be it with humans, gods, or Eternals. So as the team crumbled, Sersi joined the handfull of Eternals to salvage and save those that she could.

When things fall apart, it’s normal to sink into regret and replay the thoughts in our head, ‘ if only I had done more,  worked harder, loved deeper’. But like Sersi, sometimes, despite our efforts and abilities, we may not have absolute control over every situation. So make the most of where you are and what you have and do not let the situation plant guilt in your mind. Continue to do what is right.

Thena – When life shows it’s ugly side, find beauty in it 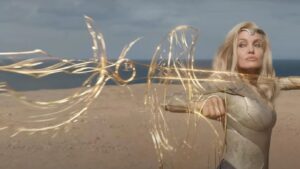 Being the daughter of Zuras, the strongest Eternal in history, Thena took on her legacy and embraced it. After honing her combat and weaponry skills for centuries, she earned the reputation of being a formidable warrior.

After years of countless battles, Thena struggled with tormented memories and emotional conflict. For a very long time, like many strong people, Thena refused to deal with those memories and emotions choosing instead to hid behing her strength , much to the detriment of those around her.

However, Angelina Jolie, who plays Thena, chose to use her struggle with a mental condition for a good purpose. In some ways, we can say that Thena suffered from what Jolie also suffered from PTSD.  Jolie however faced her issues straight on and used that experience to build her character in this film.

When our plans fail

Despite being immortal, every Eternal has had to face situations that were not within their control and each one of them reacted differently. In more ways than one, the Eternals represent how we behave and react to situations when things don’t go as planned. Sometimes, despite your abilities, hardwork and effort, life may not turn out the way you want it to. And it’s ok to feel dissappointed, sad, withdrawn, as even superheroes expereince those emotions.  However, what you do after feeling the feels can have lasting consequences, just like the decision made by each of the Eternals. What do you think about the decisions of each Eternal? Share with us?

Here are some real-life heroes who faced drowning disappointment in life and yet beat failure back in the face.