When something in our lives go wrong, often we may blame and criticize ourselves for doing the wrong thing or not doing the right thing. Regretting an action is a normal human reaction when bad things happened but guilt and shame is a much deeper emotion that can affect our self-worth.

Why do we feel guilt?

We feel guilty when an action that we did or should have been done has caused hurt to someone else. Guilt is a social emotion that results from a person’s conscience and introspection. It is a pro-social behavior that helps a person to understand how a behavior or action has negatively affected another person.

Adaptive guilt can be constructive if it is well processed and corrective actions taken. Neurotic guilt however can lead to maladaptive coping and mental conditions. Learning self-forgiveness can help to reduce feelings of guilt.

While guilt is mainly about an action, shame is often directed at self. Shame is a negative feeling about our character and how our flaws have caused a bad situation to happened or to cause harm to someone, including ourselves.

Shame, often leads to self-blame and thinking that you deserve to suffer. It can lead to self-handicapping, for example, a person who has been shamed for not being intelligent may sub-consciously decide not to study. Hence not studying hard enough becomes the reason for poor results and not because of low intelligence. Sometimes a person who feels shameful and unloved may deliberately damage a relationship to reinforce the self-believe that one is not lovable. Shame is not a pro-social emotion and is psychologically damaging to one-self.

When is it NOT ok to practice self-forgiveness.

When a person has been a victim of another person’s wrong-doing, such as victims of abuse, seeking self-forgiveness can be a reflection of self-blame and shame. It’s the perpetrator that needs forgiveness and not the victim. If a person who has been victimized feels responsible for being hurt,  there may be deep rooted self-condemning believes that needs to be dealt with.

When a person hurts another person repeatedly without any regret or effort to stop the actions, may use self-forgiveness as an excuse to dull their conscience so that they can continue to hurt others. If you know of any such person, please get professional help for them.

How difficult or easy is the process of self-forgiveness depends on how complex is the guilt and our self-concept. How much we accept and love ourselves.

Here are 4 steps of self-forgiveness.

Think about one specific event when you felt you did wrong. This should be an event that bothers you quite a bit. Be detailed about what happened.

E.g, Don’t say I was nasty to my bestie. Instead say “I shouted at my bestie when she asked me about my exam results”. Self-forgiveness is about restoring that sense of self-worth and making effort to live up to your values. It can be a very challenging process as it requires us to accept that we did do wrong.

Often, to protect our ego, we may resort to these reactions:

In other to regain a positive sense of self-worth, self-forgiveness would be needed.

Now , write a self-forgiveness contract for yourself: Do something to make up for the wrong doing and try to repair the relationship. 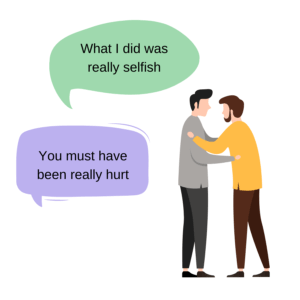 4.Work towards being a better version of you

Sometimes even after we’ve tried to make good for our wrong, those accusing voices will still taunt us. It may be because the person that we hurt is unable to release forgiveness. Or it could be that we are unable to truly forgive ourselves because we’ve come face to face with a personal flaw that we find unacceptable. Because we are human, there will always be a gap between the person we want to be and the person that we are. But we can work towards being that person.

How to be that you that you want to be

You may still fall short occasionally. But it’s gonna be ok, just forgive yourself again and keep trying.