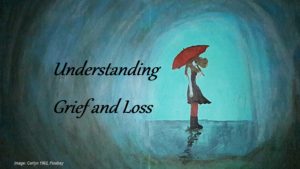 Early Adolescent is a particularly vulnerable period in terms of significant relationship loss. Research has shown that adolescent boys who lost their fathers at that age were more prone to severe depression Young people may not grief as adults do due to the specific developmental stage that they are in. Very young children may not understand object loss and may result in life-long vulnerability. Hence it is not realistic to expect a young person to grief in the same manner as an adult.

What to expect from a young person in bereavement?

Subdued reactions such as very little crying or expression of sadness, or even a happy demeanour in the early period of loss could be a defence mechanism to protect a young person from becoming flooded with overwhelming emotion.

Sleeper effect can happen where symptoms of grief persist beyond 18 months. A bereaved young person may get panicky over relationships or become overly dependent on others. Denial of a loss can result in emotional distress months or even years after the loss as young people and children give up their attachment to the deceased much more slowly than adults usually do.

Guilt reactions may occur especially for youths who have lost a sibling. This could manifest in emotional turbulence, crying and sadness that can persist for 5 years or more. Hostile images of self can result especially if there was a great deal of competition and hostility in the relationship. Universal Death Wishes can cause the young person to think that they were responsible for the death of the loved one.

School performance is often a significant indicator of emotional difficulty including school refusal, failure or decreased interest in school activity. Adolescents who have lost a closed family member particularly a parent are prone to delinquency.

Depressive symptoms may ensue especially if a surviving parent is already depressed prior to the lost. Sometimes identifying with a parent’s grief could result in depression rather than purely responding to the lost. Studies have shown a link between suicide attempts and childhood bereavement.

A young person’s self-esteem may be affected especially if the loss is interpreted as desertion.  ‘If you love me then why do you leave me’ is a question that some bereaved adolescent may struggle with.

Identification with the deceased such as emulating the good qualities of the loved one, could be either an unconscious defence mechanism or a sign that the expression of grief is incomplete. This can be more pronounced if the young person has to assume the adult responsibilities that the deceased use to bear. The young person’s development of individual identity may be affected if the person feels a need to replace the deceased sibling or a parent.

In sudden and unexpected bereavement, the belief that the world is a safe and predictable place is often destroyed, causing the young person’s capacity to trust to be eroded. Fear of other loved ones dying can result in anxiety. Some common questions may include ‘Did I cause this to happen’, ‘Will it happen to me’, ‘Who will take care of me now’. Feeling vulnerable and helpless in controlling life events can also lead to depression. You may have heard of the 5 or 7 stages of grief. While most people who grieve experience the same emotions such as denial, anger, bargaining, depression and acceptance, most do not go through the stages as proposed in the Stages of Grief theory by Dr. Elizabeth Kubler-Ross. In fact, the theory was based on interviews with the dying rather than the bereaved and is more applicable for those facing end of life. Recent research shows that grief comes in “Bouts” or waves of anguish alternating with “time out” from the work of grieving.

Research on childhood bereavement shows that a young person’s grieve can be some what different. In the first year following the lost, a young person would examine the meaning and implications of the lost. In the second year, although the young person may have more understanding and acceptance of the lost, there may also be a significant increase in anxiety and dependency on parents and significant others. In this same stage some youths may struggle with disciplinary problems, restlessness and aggressive behaviour. Anxiety levels and aggression may be reduced in the third and fourth year but over-dependence may still persist. Research also shows that about 40 percent of young bereaved may still show emotional distress 4 years or more after the loss.

When grief moves forward, the survivor will gradually integrate the “event story” of the death into his or her life narrative, while drawing on the “back story” of a loving relationship with the deceased. 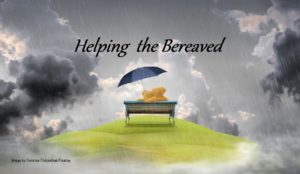 How to help the young bereaved person:

Learn about the grieving process of young people and children to sooth their guilt and confusion. Although young people may grieve in a different way from adults, every individual goes through bereavement in their own way. Do not insist that the bereaved has to grief in any specific manner or stages. As grief is often unique to a person, there is often no standard time frame for bereavement.

Discussions about the death and what happens after life, should be consistent with the culture, religious beliefs and family values of the person.

Be mindful of words such as ‘moving on’, ‘getting over’, ‘Recover and heal from the loss’, ‘Return to normalcy’, ‘Time heals all wound’. Reconciliation of the loss is a process and the person may be forever changed by the loss.

Life marker events such as death anniversary or festivals can result in increased emotional distress even years down the line. Provide assurance that sadness is normal and common for those who have lost a significant person.

Help the person to adapt to life without the loved one but do not expect life to be exactly as it was. Try to keep the person engaged in daily living and social activities but respect the person’s need for privacy. Sometimes just being with the person in a place of solitude could be helpful. Life adjustment to the loss can be augmented by ensuring:

Sudden unexpected death can lead to complicated grief. Suicide is the most difficult type of death to accept. Survivors of suicide are at a greater risk of physical and mental health problems than those bereaved by other causes. Often the feeling of abandonment and rejection is pronounced. Questioning about how the suicide could have been prevented and blaming themselves for the death can lead to Survivor Guilt. Shame can be overwhelming as there is often a negative social stigma attached to suicide.

Young people and adolescent may experience greater challenges in processing and accepting the loss of a loved one than adults do. Always take the loss seriously no matter how insignificant it may seem to you. Loss of an online friend is often dismissed and made light as the people have never really met in person. However, such disenfranchised grief can be significant as online friendships can be as genuine as real life relationships.